I had some reflections on a post that a friend of mine had.

“The Shuyukh at “The Seekers Retreat 2013″ Malayasia. Imam Afroz Ali gave one of the most empowered lectures I have heard in a long time. The subject was on Mazhabs.”

Please do not get me wrong about Imam Afroz Ali. Let me say a few things, if memory serves me I believe I met the brother at the Zaytuna institute (before it was a college in the summer of 2001). Though I could be mistaken. I know that a very good brother that I respect, Abdullah Kunde is quite close to him.  From what I have heard his disposition is that of a loving and sincere Muslim.  Also the verse above that is quoted is not meant to refer to Afroz Ali, ‘as a person who is upholding vain hadith’ and  ‘leading men astray’.  That verse clearly refers to those who do that themselves.

I believe that Imam Afroz Ali is a sincere man who is looking for meaning among the various factions and voices within the Islamic paradigm.

This is just some reflection over some very staggering claims the he is reported to have made or repeated.
Imam Afroz related, “Imam Bukhari collected over 6,000,000 Hadith. Of which he memorized approx 1.5 million. 600,000 we’re authenticated as absolutely indisputably Sahih, however only 3,500 were recorded in his Canonical work of Sahih Hadith. The reason Imam Bukhari gave was “there will come a time when so much ignorance will come upon the Ummah, that it will only serve as confusion to include more“. Many in the 10’s or 100’s of thousands if not millions of Hadith are now lost”.

This is not from me but a caption is included of the post here: 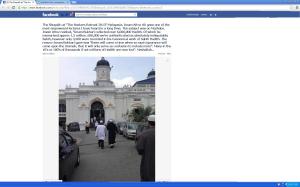 So  we are to understand that Bukhari was basically giving us the crème de la crème (the cream of the cream)?  So when weighing out what to give us out of 600,000 he decided the following would be useful because, “Muslims will reach a time when so much ignorance will come upon the Ummah, that it will only serve as a confusion to include more.”

`Amr b. Maymûn – a Companion says the following:

“I had seen in the days of ignorance before Islam, some monkeys who surrounded a she-monkey who had committed unlawful sexual intercourse and they stoned it, so I stoned it along with them.” (Sahîh al-Bukhârî  (3849)

I am really finding it very challenging to understand why Bukhari would want to pass down this particular oral tradition out of 600,000 he could have given us.

It would be interesting to see in what ways this particular narration was utilized by any of the Muslim scholars.   Was there some great moral lesson in this particular hadith?

If Bukhari was giving us an abridged version of 600,000 ahadith at his disposal; and only wanted to give us the gems, diamonds, sapphires and rubies, how did we end up with a huge lump of coal?

In other words ‘why was it news worthy‘ ?

Especially in light of the above statement that Bukhari didn’t want to ‘confuse us’. Surely out of a collection of 600,000 oral traditions there could be something of a little more substance that would help give direction and guidance?

Afroz Ali has gotten into some recent controversy you can read about that here: 594bf-afrozali