Refutation of Shaykh Imran Hosein: The Return of Jesus

“He will speak to the people in the cradle and in maturity and will be of the righteous.” (Qur’an 3:46)

So, our brother Shaykh Imran Hossein (May Allah have mercy on him) has recently used as evidence for the Return of Nabi ‘Isa -Christ Jesus the following:

“He will speak to the people in the cradle and in maturity and will be of the righteous.” (Qur’an 3:46)

Listen to the lecture from the 22 minutes mark. 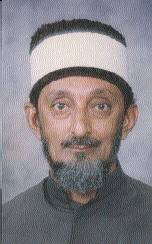 Shaykh Imran Hosein (May Allah have mercy on him)

at 23:18 Shaykh Imran says, “But the Qur’an went on to say something more. Remember that this is Surah Al Maidah, ‘ tukallimun Nasa fil mahdi wa kahlan.”

“Twice, twice you will speak. The first time is as a baby in the cradle and the second time is as an adult.”

“But uh even in London adults speak. There’s nothing big, there’s nothing miraculous about that. That’s normal. If you are an adult and you don’t speak you’re dumb.”

“But if you are an adult and you are not dumb than it is normal for an adult to speak. So where is the need for the ‘ruh al qudus’?” “Answer: The Qur’an is saying that you will speak miraculously twice.”

At this juncture let us stop and do exactly as the Shaykh ask us to do.

Now, this is important because Shaykh Imran Hosein is one of those people who have as his entire focus eschatology, the Mahdi, Dajjal, and the so-called 2nd coming of Christ Jesus.

Someone who holds such views should be able to provide evidence for them, and the fact that Shaykh Imran Hosein has to make such exegetical stretches of the Qur’an shows the patently false nature of such beliefs.

A few minutes into his lecture Shaykh Imran Hosein has some words for the Ahmadiyyah movement as well as for Muhammed Asad. However, Shaykh Imran’s misinterpretation of the Qur’an is equally bad.

May Allah guide the ummah of the Blessed Messenger [saw]. It is amazing how this crowd gathered around the Sheikh soak up all these words he has to say and I just hope that they did indeed: ‘put on their thinking caps.’

Notice the slyness of his approach here:

“But uh even in London adults speak. There’s nothing big, there’s nothing miraculous about that. That’s normal. If you are an adult and you don’t speak you are dumb.”

This subtle point is where he slowly lures his audience. In almost a trance-like state fixated upon his words, they can’t help but agree. I mean, after all, there is nothing miraculous about adults speaking is there?

This is where he slips in his suggestion and whispers to the subconscious.

First the agreement of the negative: adults speaking is nothing miraculous. [everyone is now on the same page].

Then comes the delivery: The mixture of truth with falsehood.

“Answer: The Qur’an is saying that you will speak miraculously twice.”

As the subconscious is now primed: The reader will understand that Jesus will speak while in the cradle and as an adult: So there is already a bias confirmation: Ah so Jesus does speak twice. Then comes the falsehood attached: MIRACULOUSLY twice.

Now dear reader check for yourself:

The answer: None of them of course.

“And do not mix the truth with falsehood or conceal the truth while you know [it].” (Qur’an 2:42)

Now it is a given that if a person speaks like a baby in the cradle that this is indeed miraculous but even the Shaykh himself said: “adults speak. There’s nothing big, there’s nothing miraculous about that.”

Thus what Shaykh Imran has done is to mix the haqq that-Jesus will speak as a baby and in maturity with batil -that both events would be miraculous.

Then you will see how he needs to interpolate such falsehood on the  Qur’an in order to get you to buy into his concept of some messianic figure coming later.

So now after establishing his false premise that he has hoodwinked his audience into accepting he continues the rest of his speech.

Wake up dear Muslim brothers and sisters. You are being deceived.

What about kahl and kahlan in the Arabic text of the  Qur’an.

If people want to say kahlan means 70 years of or even 800 let them roll with it because no matter how old Nabi ‘Isa Christ Jesus was, we have the following text:

So whatever these people want to say the context of the above verse makes it abundantly clear that Jesus was wakhalan when he was being taught the Torah and the Gospel and dealing with the children of Israel.

Are we really going to say that Allah [swt] is teaching Nabi ‘Isa-Christ Jesus the Torah and the Gospel upon his return? Why? What for?

So even if you wanted to be extremely and I do mean extremely charitable and go against references like:
Lisan Al Arab or Al Razi in Tafsir al Kabir just remember to remind them that this 50+-year-old Jesus, this 80+year old Jesus was doing all the above as mentioned in 5:110 before ANY SO-CALLED BODILY ASCENSION.

“This day those who disbelieve have despaired of [defeating] your religion; so fear them not, but fear Me. This day I have perfected for you your religion and completed My favor upon you and have approved for you Islam as religion.” (Qur’an 5:3)

6 responses to “Refutation of Shaykh Imran Hosein: The Return of Jesus”