“Then we will pick out from each group (sheeAAatin ) the most ardent opponent of the Most Gracious.” (Qur’an 19:69)

“The hadith states that each of these sects will claim that it is saved. The claim of every sect that is alone is the saved one is only natural: only a madman would insist on following a sect that will perish. The members of each of the sects have tried hard to prove that they follow the truth and are on the right path, the one follows by Messenger of God, may God bless him and grant him peace, and his Companions and that all others have strayed from the way of God, in both doctrine and conduct.”

“The imam (Muhammad ‘Abduh) has examined this hadith and debated the claims of each sect and the proofs offered by it to show that it is the saved sect. He then demonstrated that they are equally likely to be on the right path according to God or on the wrong one. His conclusion was that one of these sects can be the saved one since that is the one that follows the way of God’s Messenger, may God bless him and grant him peace, and which is divided among all the sects. They are the believers who are not misled by the sayings of mere mortals and who do not follow the ways of error and who only hold on to the guidance of the protected one and his Companions, who are like the stars, ‘whichever of them you follow you shall be guided’.”

“What the learned imam said is of value and his understanding of the inner values of the Islamic Shari’ah in this age, his attachment to the truth, defense of God’s religion reminds one of the earliest age when the truth was the utmost goal of the believer, searching for it wherever it leads and standing by it wherever it appears.”

The saved and the damned of the sects

“On the face of it the hadith that we mentioned about the division of the community in its different versions that 72 of the Muslim sects will perish and only one be saved. If we take this as-is and suppose that Muslims were indeed divided into 73 sects and that this number is real and finite, can we look into this matter from a different perspective?”

“Everyone of these sects contains millions of Muslims, only God knows their number. All these millions vary in their levels of knowledge, education, intellect, and religious consciousness to an extent that cannot be measured or defined. Within each of the sects the number of people who have concerned themselves with the origins of the doctrinal principles upon which the community became divided, such as predestination, divine justice, and the attributes of the Creator, is a very small minority.”

“As for the remainder of those who conform to one or other of these sects, they know next to nothing about these profound questions that require special qualifications. They perform their religious duties according to the manner in which they were taught to do so, believing in God and His Messenger, peace be upon him, and what he brought with him as a whole and in its details, seeking closeness to God through their deeds, and not having the educational qualifications that would allow them to discuss Qur’anic verses or study the question of the ‘clear’ and ‘obscure’ verses of the Holy Book. Their limited intellectual capacity does not permit them to access the sort of research carried out by the scholars of theology (‘ulama al-kalam). It would never occur to the common Ash’ari, Ibadi, or Mu’tazili to inquire into the problem of predestination; he naturally believes that noting in this universe takes place without God’s will.  The common man from among these sects does not comprehend terms like ‘Essence’ or ‘Attributes’, or if the ‘Attributes’ are identical with the ‘Essence’, and other issues that require knowledge and sharp wits. Can all these Muslims of different sects who believe in God and perform good deeds be of those who go to hell? For, on the face of it the hadith divides Muslims into 73 sects, consigning 72 of them to hell.”

“Many jurisprudents have talked about the faith of old women, saying that their approach to faith should set the example for Muslims, since, it is a faith in God that cannot be shaken nor succumb to any uncertainty, however great it may be. This believer is despite his naivety and simplicity, a strong believer. It is said that some of the Companions asked a woman once in the presence of God’s Messenger, may God bless him and grant him peace, about God and she replied, ‘He is in the heavens’. He, peace be upon him, then said, ‘Leave her alone, she is a believer’. He did not ask them to give her a long lecture about the impossibility of the Creator, exalted and glorified is HE, being contained or indwelling (in some created thing) since her intellectual capacity does not allow her to absorb such issues. Are all these old women-who get away with their faith unscathed, who know their Lord, perform their duties, preserve their religion, and avoid what God has forbidden-bound for hell, just because they belong to one of those sects which the hadith, on the face of it, has condemned to painful chastisement? Does Islam require that all the followers of the sects, men, and women, investigate the origins of these sects and their doctrines, in order to discover which is the saved one and enter it, in order that the mercy of God and His satisfaction may enfold them?”

“I think that such an obligation is beyond human nature and that the tolerant nature of Islam would not require such an arduous task, one that would not be within the ability of the average Muslim who believes in God and think of Him when going about his work, and who fears Him and obeys His prohibitions.”

“What God’s Messenger, may God bless him and grant him peace, said (‘he will be successful if he has spoken the truth’) about the man who swore that he would not perform any acts of worship beyond the obligatory ones, provides an example of the tolerance of Islam and its forbearance and its acceptance of a believer’s deeds without any requirement that he delves into questions of philosophy or the divisions between schools of thought.”

“Before concluding this section, I think it appropriate to cite some selections from Abu Ya’qub’s sayings about the division of the community and the way to reconcile God’s saying, exalted is He, ‘You were the best community brought for people [Al ‘Imran, 110], and the hadith of the 73 sects (My community shall be divided into 73 sects…’). He said: Judging by what we have seen of this community’s extension into the eastern and western limits of the earth, and provided that God, exalted is He, protects them from idol-worship and taking other than Him as Lord and that there will always be people of the right path among them, then salvation is [their] natural destiny, except for two classes: those that innovate in the religion of God, may He be magnified and glorified, and those that persist in disobedience to Him and are distant from Him: neither of these two has any chance of going to Paradise.” 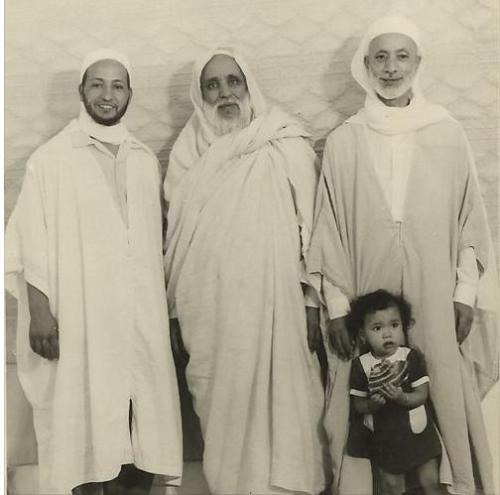 Prominent Libyan Shaykh Muammar Ali Yahya (in the middle).  May Allah (swt) grant him paradise and continue to benefit the believers by his knowledge and insights.

Source: (Ibadism in History Volume 1: The Emergence of the Ibadi School)  by Shaykh Muammar Ali Yahya, the illustrious guide, the caller to the truth, may Allah have mercy on him.