“Indeed, Allah commands you to render trusts to whom they are due and when you judge between people to judge with justice. Excellent is that which Allah instructs you. Indeed, Allah is ever Hearing and Seeing.” (Qur’an 4:58)

This is a sociological experiment I conducted on my social media regarding the tale that some from among our Shi’a brothers relate in regards to Umar (r.a), Ali (r.a), and Fatima (r.a).

Once Fatima came walking and her gait resembled the gait of the Prophet (saw). The Prophet (saw) said, “Welcome, O my daughter!” Then he made her sit on his right or on his left side, and then he told her a secret and she started weeping. I asked her, “Why are you weeping?” He again told her a secret and she started laughing. I said, “I never saw happiness so near to sadness as I saw today.” I asked her what the Prophet (saw) had told her. She said, “I would never disclose the secret of Allah’s Messenger (saw).” When the Prophet (saw) died, I asked her about it. She replied. “The Prophet (saw) said: ‘Every year Gabriel used to revise the Qur’an with me once only, but this year he has done so twice. I think this portends my death, and you will be the first of my family to follow me.’ So I started weeping. Then he said. ‘Don’t you like to be the chief of all the ladies of Paradise or the chief of the believing women? So I laughed for that.”

If indeed our brothers from among the Shi’a believe that this narration is true and that Fatima(r.a) would be the first from among the family of the Beloved Messenger (saw) to die it cannot also be true that the “unborn” son of Fatima (r.a) would die as he would technically be the ‘first of my family‘ to follow.

It’s not believable to say that Muhassin was aborted as a fetus and yet the above narration says that he was born.

Also, remember the presence of a statement in a book does not necessarily make it authentic. I do not know of anyone who holds this position. The chains of narrators the isnaad needs to be scrutinized. Do the reports contradict other pieces of evidence? This is what needs to be understood when engaging in dialogue with anyone from among the Muslims.

Now let us assume for the sake of argument that this incident took place as suggested by some of our Shi’a brothers. Obviously learned people like the Ayatollah above don’t buy it for a hot minute.

So knowing that Muslims have vested interest in this tale and there are emotional attachments to it I decided to ask people who were absolutely clueless about this incident.

I decided that I would ask my non-Muslim friends about their thoughts concerning the characters of the two major individuals in this incident. So this is the data that I gave to them:

I want my non-Muslim friends to answer this question. Any Muslim who comments I’ll delete it. This is a sociological experiment.

What would you say about a man (person A) who punched another man’s wife(person B) in the stomach and caused her to miscarry? Person B (a man) does absolutely nothing in response to person A (a man).

Latter person, B marries one of his daughters to person A.

Person B names his son after person A.

What follows are their responses. Some of them are quite interesting. I have covered up their names to protect/respect their personal privacy. 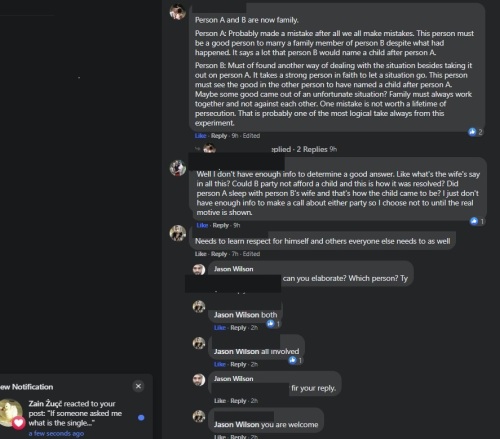 “I hope person a is not you.” Yikes looks like I need to work on my public perception! lol.  Well, so there you have it. 20 different responses to this scenario.