Dastardly Bowl Licking Dogs and The Thought Process of Some Muslims

“They ask you what is lawful to them (as food). Say: lawful unto you are all things good and pure: and what you have taught your trained hunting animals (to catch) in the manner directed to you by Allah: eat what they catch for you, but pronounce the name of Allah over it: and fear Allah; for Allah is Swift in taking account.” (Qur’an 5:4)

Before reading this post you may wish to read this one first.

This brief article is for us to reflect upon the thought process that many of us as Muslims have in regard to our tradition.

The following is taken from https://islamqa.info/en/answers/41090/how-purification-from-the-najaasah-of-a-dog-is-done

“Muslim (279) narrated that Abu Hurayrah (may Allaah be pleased with him) said: The Messenger of Allaah (peace and blessings of Allaah be upon him) said: “The purification of the vessel of one of you if a dog licks it, is to wash it seven times, the first time with soil.”

And Muslim (280) narrated that ‘Abd-Allaah ibn al-Mughaffal said: The Messenger of Allaah (peace and blessings of Allaah be upon him) said: “If a dog licks the vessel of one of you, let him wash it seven times and rub it with soil the eighth time.”

In these two ahadith the Prophet (peace and blessings of Allaah be upon him) explained how purification from the najaasah of a dog is to be done, which is by washing the vessel seven times, one of which should be with soil. Both are required. “

Comments:  One will notice that the text contains contradictory information.

Now besides the very obvious and glaring example of someone (presumably a narrator in the chain) not being careful with the words of the Blessed Messenger (saw) we have something interesting here to reflect upon.

Note that in both hadith there is the presence of a dog.   The dog is doing what?

The dog is licking a bowl, presumably one that people will use to eat and drink from.

Does this hadith say, ‘When any of you live in a maximum-security fortress and a dog breaks through the security and alludes detection and storms into the kitchen and licks the bowl…….’? ??

If a dog is licking a bowl that you will use for drinking and/or eating it shows that dogs lived in close proximity to Muslims!

It is proof and evidence to show that dogs themselves are not problematic or unclean!

How could any sensible Muslim who viewed or thought that dogs were unclean allow a dog to be in such proximity to their kitchen utensils? 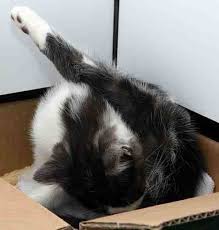 This hadith which is not quoted verbatim from the Blessed Prophet (saw) is simply (nasiha) or advice on keeping bacteria and germs from animals.

As seen from the above both dogs and cats and many animals will lick their own genitalia. They lick the placenta off of their pups and kittens when born. They do not use water nor toilet paper when cleaning their anus, they will use their tongue, and then want to lick you on your mouth, and lick bowls that use for food and water.

Diseases transmitted from animals to humans are called “zoonotic”. Bartonella henselae, which is a bacterium that is transmitted to cats from fleas is also housed in cats’ mouths. It is the cause of severe skin and lymph node infection called cat-scratch-fever.  Que the Ted Nugget music.

The interesting thing is that the Blessed Prophet (saw) was simply giving people advice that could easily extend to any and all animals in this scenario.

The Blessed Prophet Muhammed (saw) was not there to give us an exhaustive list of all possible scenarios.

Ya RasulAllah what if a giraffe licks my bowl ?!

Ya RasulAllah what if a possum licks my bowl ?!

Ya RasulAllah what if an orangutan licks my bowl ?!

The example giving by the Blessed Messenger (saw) is not meant to be an exhaustive all-inclusive list of every scenario. That is why you get these unnecessary 10 volume fiqh books that discuss these matters in depth.  Non necessary because we as human beings are supposed to use the intelligence that Allah (swt) gave us and do (taffakur) reflection upon the guidance and examples that the Blessed Prophet (saw) left us with.

The thought process of many Muslims is both interesting and heartbreaking.  People will  make religion to be such a burden and they will either do one of the following:

I would love to teach a fiqh class and one day have a dog come into the class and lick a bowl and wash it with what people in the class believe to be the required number of water washing and then with soil.

I would say, “This bowl is now tahir according to the Blessed Prophet (saw). Who would  like to eat or drink from this bowl?”

This is because of the stigma in their mind that a dog now licked the side of the bowl.  Even though by their own understanding and own admission that the bowl is clean (tahir); you would scarcely find anyone willing to eat or drink from that bowl!

That shows the stigma that certain ahadith can create!   Somehow this hadith has been used to say that keeping a dog, in general, is not allowed, to be near or around dogs or to have them in close proximity is makruh or haram.

The fact is the very hadith itself argues against this point!   The companions of the Blessed Prophet (saw) and people, in general, do not keep their eating/drinking utensils out in the open.

I would encourage to take a look at my article here: