“Do not mix truth with falsehood and do not deliberately hide the truth.” (Qur’an 2:42)

What we hear may not necessarily be the truth. Nowadays the anti-Sufi groups, which are at the same time strict followers of Ibn Taimiyyah, as well as Sufi groups (namely the Ashari) affiliated with theological schools that Ibn Taymiyyah was not affiliated with have both misrepresented and seemingly suppressed the truth about this iconic figure in the history of Islam.

When searching the history of Ibn Taimiyyah we find that he himself was not against ‘Sufism’ but he was even adorned with the cloak (khirqa) of shaikhood of the Qadiri Order! Believe it or not, Ibn Taimiyyah was himself a Sufi, but he accepted Tasawwuf on the condition that it follows shari’ah, which no Sufi order objects to.
In fact in the Hidayua al-Addhkiya ila Tariq al-awliya by A’ynal Din b. Ali Ma’bari a very beautiful description is given to Shari’a (Laws), Tariqah (path), and Haqiqa (Truth.)

He said, “Shari’a is like a boat, Tariqa is like an ocean and Haqiiqah is like the precious pearl. Whoever aspires after the pearl must (definitely) embark on the boat and then divine into the ocean.” Logically nobody reaches the pearl without having to sail into the boat. In this book will you find many more shocking realities about Ibn Taimiyyah that contradict the very foundation of the neo-Salafite movements. It will also shed light upon the reason why many Sufi groups affiliated with theological positions that Imam Ahmad, Shaikh Abdul Qadir Al Jilani, and Ibn Taimiyyah were not upon may like to cast aspersions upon the shaykh.

In fact, Ibn Taimiyyah says: “The miracles of saints are absolutely true and correct, by acceptance of all Muslim scholars. And the Qur’an has pointed to it in different places and the Hadith of the Prophet (s) have mentioned it, and whoever denies the miraculous power of saints are only people who are innovators and their followers.”

Orientalist, Modern Islamist, and Sufi orders who follow theological schools that Ibn Taimiyyah, Imam Ahmad, and Shaikh Abdul Qadir Al Jilani were not upon having contributed to the misrepresentation of Ibn Taymiyyah as an enemy of Sufis. This has been propounded even more strongly lately by the scholars of the “neo-Salafi” school, whose followers claim to strictly adhere to Ibn Taymiyyah’s teachings, but who in fact have severely deviated from them in this area of understanding.

However, regardless of the desires of one group or another, the facts provide a clarification of reality: that Ibn Taymiyya accepted Tasawwuf on the condition that it follows shari’ah, and that Ibn Taymiyyah himself was not only a Sufi follower but was adorned with the cloak (khirqa) of the shaikhood of the Qadiri Order.

A closer look at the facts:

Ibn Taymiyyah’s supposed anti-Sufism sentiment is a clear cut misrepresentation of the truth. To conclude that Ibn Taymiyyah opposed Sufism/Tasawwuf as a whole, simply because he considered particular activities or statements by some individuals and groups as unacceptable in shari’ah, is like concluding that he opposed the Science of Fiqh because he criticized the viewpoints and practices of certain fuqaha (jurists). This would be more than exaggeration, it is completely inaccurate.

Ibn Taymiyyah received initiation as a Sufi Sheikh. The fact that Ibn Taymiyyah himself was  Sufi has been conveniently ignored by those who chose to misrepresent him, and with good reason: how could someone say that Ibn Taymiyya opposed Sufism/Tasawwuf and that he was a Sufi/mutassawwif/ in one and the same breath? Hence the corollary statement to Ibn Tamiyyahs alleged anti-Tassawuf stance is that “he could certainly not have been a Sufi,” compounding inaccuracy with speculation.

Clear proof that most of the great ‘ulama and the major figures of the Four Schools of Islam were trained in tassawwuf exists in the specialized biographical books known as “Tabaqat.” Tasawwuf was part and parcel of the complete education of a Muslim scholar, from the beginning of the formation of the Islamic curriculum until the gradual weakening and dismantling of the institutions and figures of Islamic higher education in the twentieth century. This resulted in the replacement of the Islamic ‘ijaza’ system (being “licensed” or receiving permission to teach from one’s own teacher), with the modern doctoral system of degrees, inherited from the West.

Far from denigrating or attacking the Sufi component of the Islamic sciences like some of our contemporaries who claim him as their reference, Ibn Taymiyyah, in fact, praised it in his time, endorsed it, participated in it, and achieved its highest formal level, which is to receive the khirqah, the equivalent of the ‘ijaza or permission in Sufi terms, from a Sufi shaikh.  The khirqah, representing the cloak of the Prophet (saw), is passed to a student of a Sufi shaikh, only when he is seen to be fit and fully qualified to pass on the teachings he has acquired from his shaikh in turn to students of his own. In this he has simply been one of many among the Hanbali ‘ulama who both educated him or were educated by him, to undergo the expected training and instruction in the various disciplines of Tassawuf appropriate to the scholarly vocation.

Many well-read specialists of Islam are to this day still surprised to hear that Sufis al-Ansari al-Harawi (d.481 H.) and ‘Abdul Qadir al-Jilanai (d. 561 H) were both very strong Hanblis. When one refers to their biographical notices in Ibn Rajab’s  [student of Ibn Qayyim] “Dhail ‘ala Tabaqat al-Hanbabila,”  one finds al-Ansari referred to as “as-Sufi” and Jilani referred to a “az-zahid.” Ibn Rajabs use of these terms in close proximity indicates their inter-changeability.

Ibn Rajab’s two-volume biographical work covers a period of three centuries, from the middle of the 5th century Hijri to the middle of the 8th. Identifiable as Sufis are over one-third of all the Hanbalis scholars treated by Ibn Rajab and other sources from the same time period.

Let us examine their record.

Ibn al-Jawzi’s work Talbis Iblis is perhaps the most important single factor in keeping alive the notion of this hostility towards Sufism. In reality, this work was not written against Tasawwuf as such at all, nor against Sufis alone. However, it was an indictment of all unorthodox doctrines and practices (according to Sunnis), regardless of their sources, and opposed any which were innovations in the rule of shari’ah-i.e not found in the Qur’an and Sunnah, wherever found in the Islamic community, especially in Ibn al-Jawzi’s time. It was written against specific innovated practices of many groups, including philosophers (mutakallimoon), theologians, traditionalists (‘ulama-al-hadith), jurists (fuqaha), preachers, philologist, poets, and Sufis. It is in no way an indictment of the subjects they studied and taught, but were an indictment of specific introductions of innovation into respective disciplines and fields.

Ibn al-Jawzi has written other works, which are not only in favor of Tasawwuf, but present its greatest figures in the most complimentary light. Two works considered as pillars in the field of Tasssawuf are Safwat as-Safa and Minhaj al Qasidin wa Mufid as-Sadiqin. In addition, full-length biographies in praise of the early Sufis have been penned by Ibn al Jawzi, including Fada’il Hasan al-Basri (The Gracious Character of Hasan al-Basri), and Manaqib Ibrahim bin Adhan, (The Good qualities of Ibrahim bin Adham), Manaqib Bishr al-Hafi, Manaqib  Ma’ruf al-Karhkhi, “Manaqib Rabi’a al-Adawiyya,. In sections of his book al-Muntazam many biographical notices may be found in praise of the Mutasawwifeen.

As for Ibn Taymiyyah, one would search in vain to find his works the least condemnation of Sufism as a discipline. He opposed the seemingly pantheist description of certain Sufis, known as the “ittihadiyya,” but he showed his great admiration for the works of the Sufis Junayd Baghdadi, Sahl at-Tustari, Bayzaid al-Bistami, Abu Talib al-Makki, al-Qusharyri, Adul Qadir al-Jilani, and Abu Hafs as-Suhrawardi.

At present we are in the position to show that this allegedly great opponent of Sufism was himself a Sufi, who belonged to at least one  ‘tariqat’, but especially to that of ‘Abdul Qadir Jilani.

In a manuscript of the Hanbali ‘alim, Shaikh Yusuf bin ‘Abd al-Hadi (d. 909H), entitled Bad’ al-‘ula bi labs al-Khirqa [found in Princeton, Sorbonne, and Damascus, Ibn Taymiyya is found in a Sufi spiritual genealogy with other well-known Hanbali scholars, all except one (Say. Jilani) heretofore unknown as Sufis. The links in this genealogy are, in descending order:

(Both Abu ‘Umar b. Qudama and his brother Muwaffaq received the khirqa directly from Abdul Qadir Jilani himself.) Further corroboration of two links separating him from ‘Abdul Qadir Jilani comes from Ibn Taymiyyah himself, as quoted in a manuscript of the work al-Mas’ala at-Tabriziyya (manuscripts, Damascus, 1186 H):

Ibn Taymiyya is quoted by Yusuf ibn ‘Abd al-Hadi, affirming his Sufi affiliation in more than one Sufi order:

Further on he continues: “The greatest tariqa [ajallu-t-turuqi] is that of my master [sayyidi], ‘Abdul Qadir al-Jilani, May Allah have mercy on him.”

The essence of this commentary on “Futuh al-Ghaib” is to show that Sufism, when orthodox, is completely in consonance with the Qur’an and sunnah and that the consensus of the community. A Tasawwuf not based on the revealed law is heretical. In his commentary, Ibn Taymiyya upholds ‘ilham’ or Sufi inspiration, as evidence stronger than weak analogy [qiyas], or a weak tradition [hadith], or istis-hab cited by those who are immersed in fiqh, or divergences of the law [khilaf], or the principles and sources of the law [usul-al-fiqh]. HE places inspiration [ilham] on a level of legally valid evidence on which to base a preference for one action against another when all other sources fail.

The perfection of the soul, says Ibn Taymiyyah, does not consist in mere knowledge. On the contrary, along with the knowledge concerning Allah, there must necessarily be love [mahabba] of Allah, worship of Allah, and the turning back to Him in repentance. Real tawhid consists in worshiping no one but Allah, and worship calls for perfect love [kamat al-hubb][, perfect veneration [kamal at-ta’zim], perfect hope, fear, reverence, and respect [kamal ar-raja’ wal-khishya wal-ijlal wal-ikram].

Insh’Allah there will be more to come.

There are a number of reasons why many different groups (especially those who want division and discord) among Muslims would keep this information hidden.

#1) Sunni Muslims who belong to Sufi groups and associated with the Ashari theological school don’t want people to know Ibn Taymiyyah who was Athari in his school was a Sufi.  This gives the impression that Sufism is a monopoly of those who follow the Maturdidi or Ashari theological position.

#2) Those Sunni Muslims who belong to the theological schools of the Maturdidi and Ashari and also follow Sufi tariqat have high esteem for Sheikh Abdul Qadir Al Jilani (who was Athari in creed) don’t want people to connect the dots.  The reason being is it takes the wind out of the sails of those who make takfir upon the Atharis. They dare not do this with Sheikh Abdul Qadir Al Jilani.

#3) Those who say they follow the ‘Salafi Manhaj‘ -they rely heavily upon Ibn Taimiyyah and they are harsh in their critique of Sufism and Tassawuf in general. They would not want any of their followers to even get the slightest whiff that Ibn Taimiyyah belonged to a Sufi order.

#4) It is a useful tool in the heads of those who have machinations upon Muslim lands and have a vested interest in keeping the divide going among Muslims; especially Sunni Muslims (the largest group).

If you enjoyed this please feel free to read part 2. 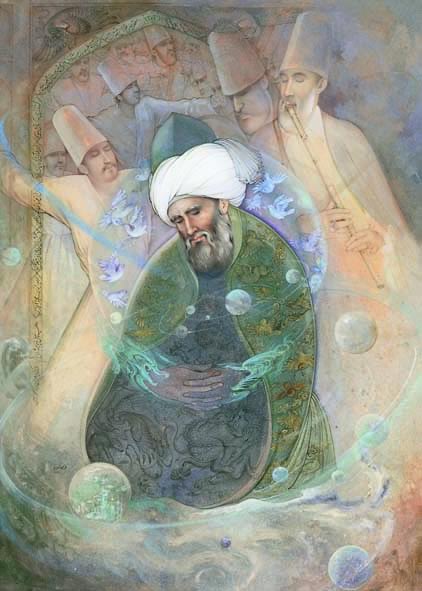